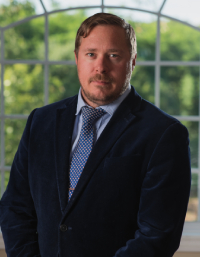 After serving in the Army as a combat medic, Christopher received his bachelor’s degree in Political Science from Grand Valley State University and his law degree from Western Michigan University’s Cooley Law School. Christopher received numerous “Top Advocate” and 1st place awards while at Cooley Law, with a special focus on fathers’ rights, litigation, and criminal justice. Christopher served as the President of the Children’s Law Society, and earned exemplary grades for his writing and client advocacy abilities.

After law school, Christopher worked in Detroit as a litigation attorney. While litigating in Detroit, Christopher developed a strong reputation as a well-tempered attorney, who zealously prepares to ensure the best possible outcome for his clients. Christopher’s unbending determination and aggressive litigation style earned him respect from his colleagues along with the nickname “Bulldog.”

Christopher decided to become an attorney after he experienced firsthand the unfair bias that parents often encounter when seeking their own rights. Without the means to hire a lawyer, he began to research and understand the complexities of the legal system as he fought for the welfare of his own daughter. Christopher eventually gained full custody of his own daughter. Christopher’s own personal challenges with the complex legal system led to his desire to help others in a greater capacity.

Christopher remarried in 2016 and enjoys spending days boating on the Lakeshore with his wife and 11-year-old son. Christopher’s daughter now attends college in Florida, and Christopher works to help families avoid the legal struggles that he faced in his younger years.