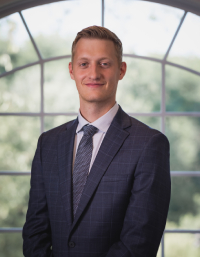 Attorney Benjamin M. Norg is a former prosecutor, who specializes in Criminal Defense at Sharp & Associates Law Firm. Benjamin was born and raised in Kalamazoo, MI. After receiving his bachelor’s degree in Criminal Justice at Western Michigan University, Benjamin attended law school to follow his passion for helping others through the legal system.

Benjamin most recently worked as a Prosecutor at the Kalamazoo County Prosecutor’s office. While at the Prosecutor’s office, Benjamin worked tirelessly, allowing him to become a highly respected expert in his field. Benjamin also quickly garnered recognition from his peers due to his uniquely persuasive argument and advocacy skills. Benjamin resigned from his position to bring his unique perspective and experiences to Sharp and Associates Law Firm.

Benjamin is a member of the State Bar of Michigan and the Kalamazoo County Bar Association. He also serves on the Michigan State Bar Character and Fitness Committee. In his free time, Benjamin enjoys spending time with his wife, son, and daughter.